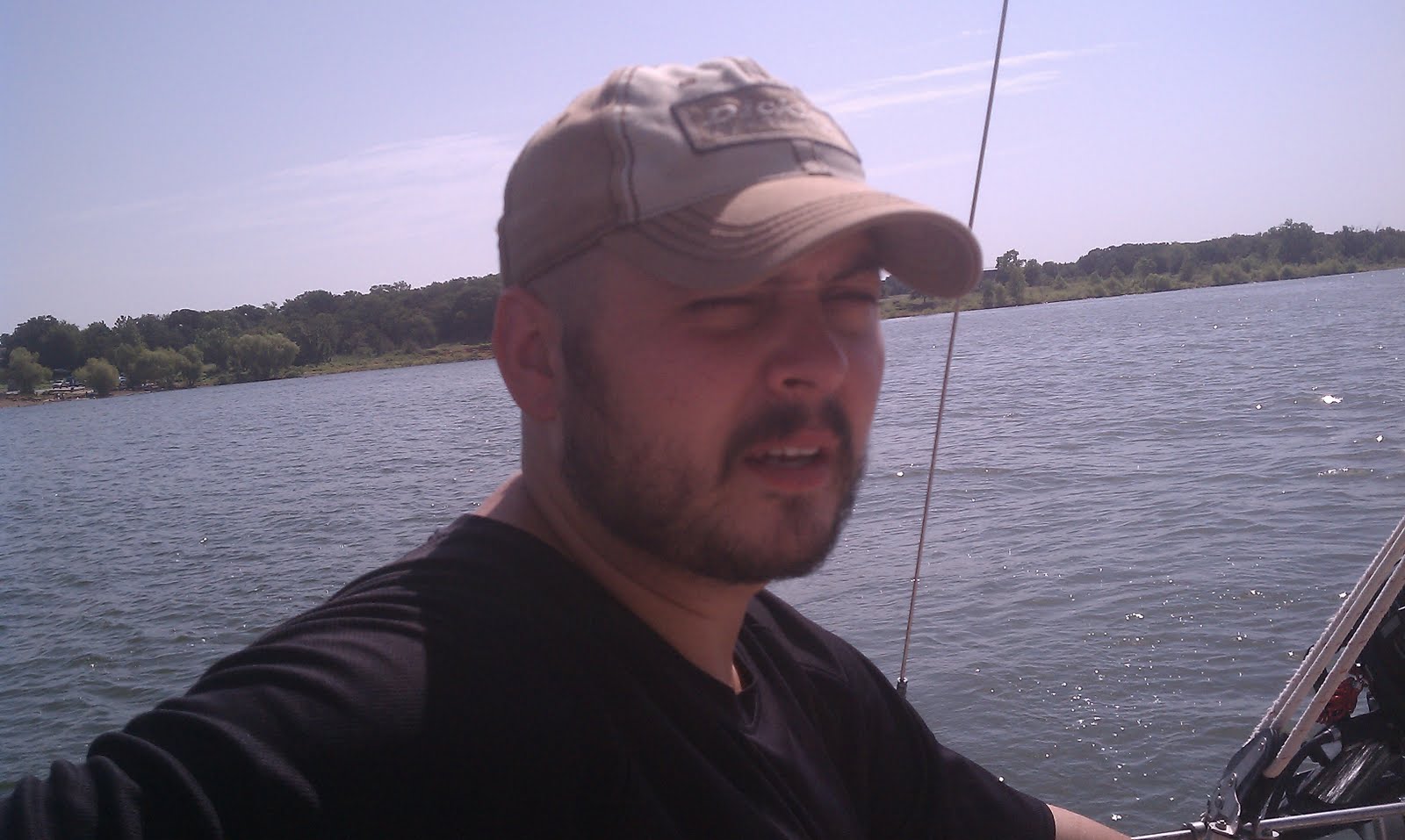 6:15 AM : Rise and shine… er sort of. Drew awakens reluctantly

6:30 AM : Start the morning off right with a big bowl of sugar…. I mean cereal

6:45 AM : Get in the car and head towards our rendezvous point at Nathan’s house

6:46 AM : Check my text messages from the night before and see that I received a message at 2 AM cancelling….

Ok, so the morning didn’t start off quite the way that we had planned. Noticing that the forecast for the next morning called for absolutely zero wind, Nathan had sent me a cancellation text. With a disappointed eight year old in tow, I headed back home. Thankfully, the forecast was upgraded and we decided to head to the lake a little later that morning. So after stopping by the quick stop for ice, something to drink, sun flower seeds and some Twizzlers, Nathan, Drew and I headed to Scott’s Landing Marina on Lake Grapevine.

Before we could leave, of course there was preparation work to be done. Nathan attempted to teach me correct terminology and basically how sailing works but most of it went right over my head. Masthead, mainsail, jib, tiller and boom were discussed but  I mostly followed instructions. Hook the jib sheets here. Pull them through pulleys there. To finally just saying “unhook the latch and pull the BLUE rope, not the RED one yet, until the sail is up”. Once everything was in its proper place, Nathan fired up the motor and took us out of the cove.

Once we were out on the lake, we found that what we feared had come to pass. The lake looked like a huge sheet of glass. There were no waves and worse no wind! There had been talk of racing another boat that was also out on the lake that morning but it appeared as if that wasn’t in the cards this time. At about that time, Nathan pointed to a dark patch of water not too far away from us. He explained that this was usually a pretty good indicator of exactly what we needed… wind! Now that we had some wind things started picking up, mainly the speed in which the boat glided across the water. This was more like it, there are not many things more relaxing than kicking back on a sailboat with the wind blowing through your hair… well something like that anyway.

It turns out that not a whole lot happens in the middle of the lake. We watched motor boats pulling skiers and enjoyed seeing a few wipe outs. For a second there we saw a school of fish flopping out of the water. There was a rogue plastic bag… but wait! What is that? Is that a bunch of people in pure white robes trying to drown each other? Why Yes, Yes it is. It looked like a scene straight out of the bible. We were never able to tell for sure if it was a group of Christians or Muslims. I’m sure there is some kind of social commentary that can be made about that but I’ll leave that to the professionals.

Swimming was next on the agenda. Our boat unfortunately didn’t have an anchor, so stopping wasn’t an option. At this point we were moving along pretty quickly. If we just dove in, the boat would float away before we could get back inside. Its not actually that easy to turn a sail boat around for a pickup. So there was only one sane thing that we could possibly do… tie ourselves to a rope, dive in and get pulled behind the boat for bit. This is exactly what we did. It was an especially enticing prospect for Drew who attempted to get himself stranded in the middle of the lake over and over again despite his fear of the Grapevine Lake killer alligator that was in the habit of eating children. I’m not sure where he got this idea from.

As suddenly as it started the wind died down. We were again sitting in the middle of the lake looking at our perfect reflection on the glassy waters around us. Everyone agreed that it was time to call it a day and we headed back to the marina, albeit slowly. Once we arrived, we cleaned up, unhooked things here and tied them back up there and folded up what I believe was the jib. Drew and I had a great time and look forward to going again whenever the opportunity presents itself.