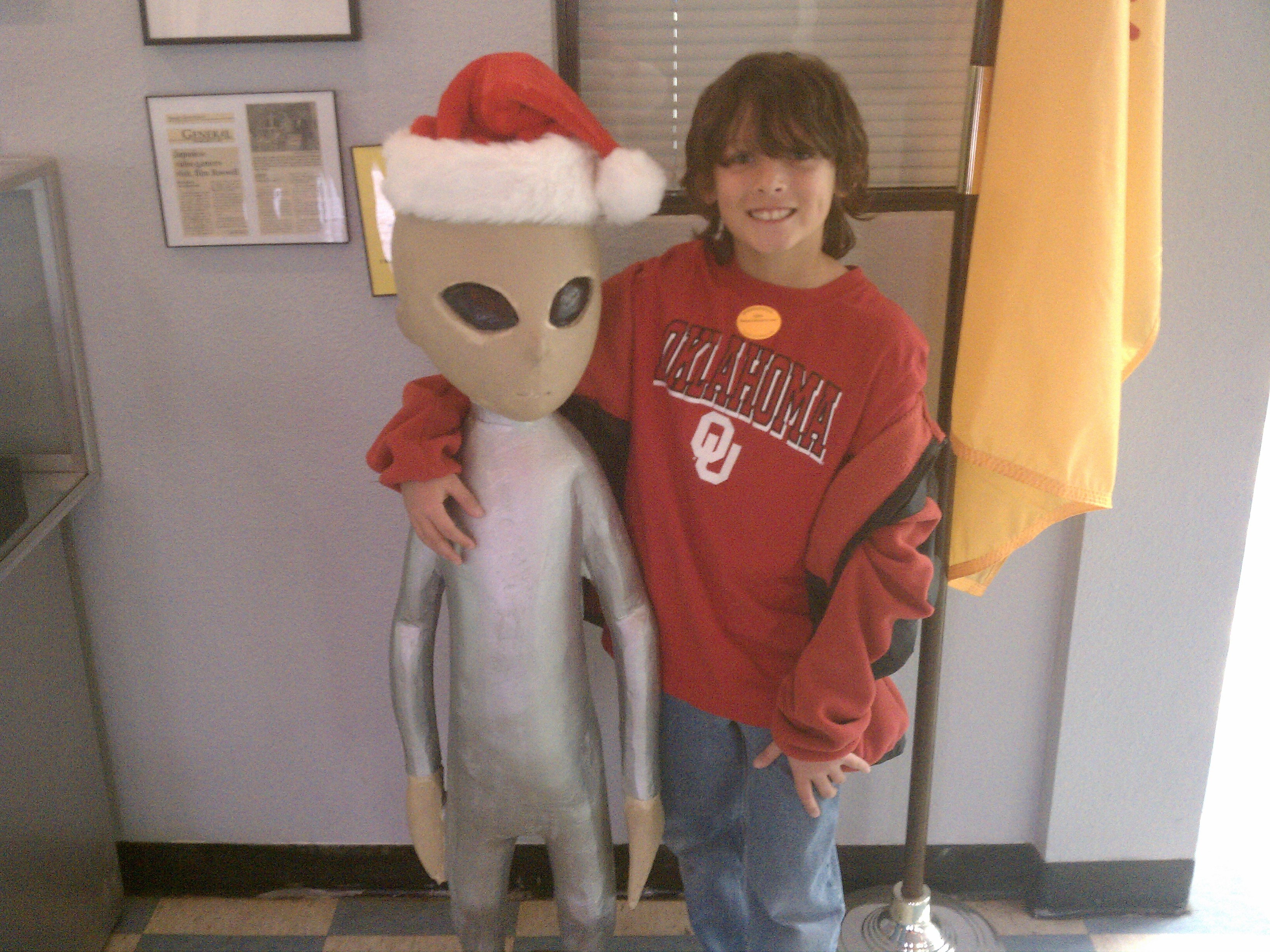 In case you missed it here is the story of the first day of our trip to Glendale Arizona for the Fiesta Bowl.

I woke up Friday morning worried and exhausted after enduring nightmares of our party stranded in the mountains, snowed in with a vehicle that would only travel 2 miles an hour. I was both thankful and terrified once I realized that we were still in Roswell and not about to endure a frigid winter that was sure to end in cannibalism and other unspeakable atrocities. On the other hand, we would probably spend New Years in alien country.

The first thing I did was get online and check the damage from the winter snow storms that had crossed between us and our intended destination. As feared the path west on highway 380 through the mountains was not advisable to say the least. It then occurred to me that without a running vehicle the road conditions between us and Glendale mattered little. It was time for Dad and I to attempt starting the increasingly unreliable Toyota Matrix.

To our astonishment it started up like a champ. This was probably the worst thing that could have happened. Since we weren’t sure what was wrong, we had no way of knowing if it would happen again. However, we told ourselves that surely it was no coincidence that this happened shortly after our brush with the disaster of almost running the car out of gas. Obviously, that whole ordeal had triggered some kind of safety mechanism that had reset itself once it sat overnight. Linda was suspicious but Dad and I were convincing and finally she reluctantly bought into our fanciful story and we prepared for departure.

When it comes to packing for road trips there seems to be a few different methods. Dad packed his entire road trip wardrobe in a bag the size of just one of Linda’s hand bags. Linda’s goal was to be sure that we would all have all the necessary comforts of home, while I was mostly concerned with the obvious necessity of audio and video equipment. Keeping these possessions safe and secure led to several trips back and forth from car to hotel room during each stop. I can’t leave Drew out, his belongings were mostly centered around reducing any possible situations of boredom, a pursuit that led us to our next location, Wally World.

After a full day on the road and a suspicion that possibly it had been bad to hang two power strips off of a cigarette lighter power converter, we decided to limit use of the computer. This caused considerable distress for Drew who was facing a full day of *gasp* nothing to do. To remedy this we decided to stop by Walmart before we headed to Alamogordo via Ruidoso and thank God we did. At Walmart there was a conveniently placed McDonalds where Linda picked up breakfast. Meanwhile Drew and I purchased a copy of Percy Jackson and the Last Olympian since he had finished the prior book the day before. Now that we were fully stocked and ready to go we headed back to the parking lot where once again the Matrix failed to start.

So there we were at 7 am stranded at the Roswell Walmart with a ten hour drive ahead of us and a non refundable hotel room booked for that night in Surprise, Az.  Things were not looking good and I started wondering if possibly God was trying to tell us something. We called the local Toyota dealer who sent a courtesy shuttle and a tow truck and we soon found ourselves sitting in the lobby. We explained our situation and they began the process of plugging a computer up to the matrix which I envisioned being something like C3P0 speaking bachi to a moisture vaporator. After an hour or so they came back to us with the ole good news bad news routine. The Matrix had a bad computer which had been recalled so they would fix it for free, however they didn’t have any in stock and couldn’t reasonably expect to have another until Tuesday. Need I mention again that this was Friday, the game was the next day in a city that was nearly ten hours away and we had a NON REFUNDABLE hotel room booked! After some crafty thinking, several imaginative solutions to the problem were discussed. We finally decided to rent a car from the dealership at a discount and prepared to finally leave Roswell. However it would not be once and for all as we might have hoped, we now had to return and pick up grandma’s Matrix once it was given a new brain.

Stay tuned in to hear about our trip across the desert through long range missile ranges and our encounters with local dogooders determined to help no matter what the cost.