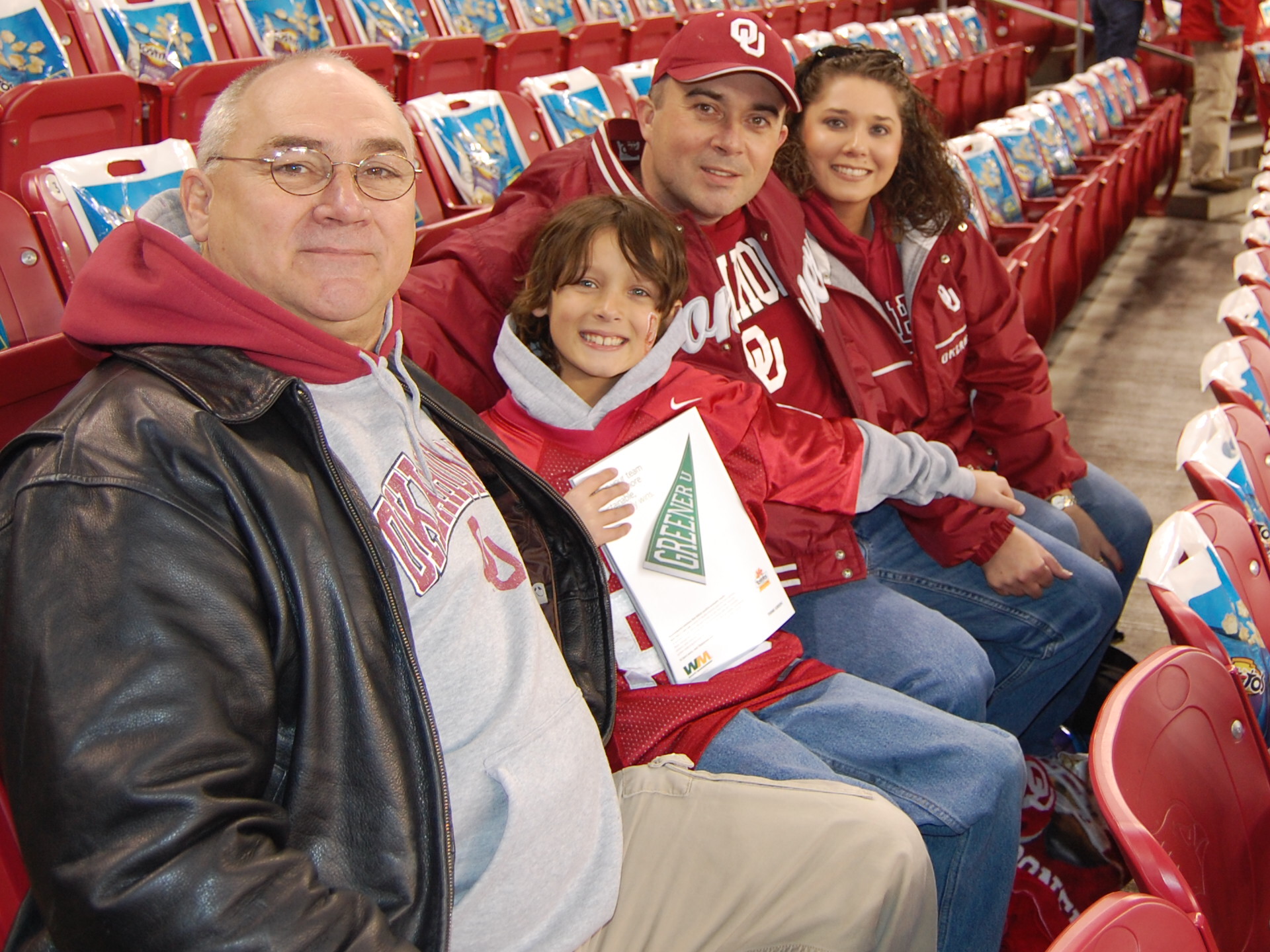 For what felt like the first time in awhile during our Fiesta Bowl road trip, I woke up and everything was perfect. I took a shower and headed down to the hotel restaurant for breakfast and was greeted by several hotel guests donning Crimson and Cream. I was greeted on several occasions with a loud “BOOMER” which I of course replied with an equally loud “SOONER”. Everyone seemed as excited as we were. There were also Connecticut Husky fans who were very nice and even what I might describe as humble. They seemed happy to just be going to a BCS bowl. I found myself reminding them of our recent travails at the Fiesta bowl against lesser teams than Connecticut. Honestly though, I felt pretty confident that we would come home winners.

It was early and we had the whole day to kill until the game started at 7 PM. The area next to the University of Phoenix stadium had all kinds of gift shops, clothing stores, restaurants and you name it. There was a big stage where live music was to be performed and would soon be crawling with football fans. We couldn’t wait, but unfortunately we had to. They weren’t letting anyone park until 12:30. So what did we do in the meantime? We went on a mission of course.

Somewhere in the hustle and bustle of travelling half way across the country, something had happened to Linda’s sunglasses. She could still wear them and while being worn you couldn’t tell anything was wrong with them but that didn’t matter. The frame was slightly bent and she required unblemished sunglasses in perfect working order. Not only were those requirements in place but also this new pair of sunglasses must have a similar shape to her current ones and not be too expensive. Typically I opt for the “Watch the Kids” task of this sort of shopping expedition, but this day I would get to observe the process personally in all of its glory. Near the area that I had dubbed, the Fiesta Bowl Complex, there was a Cabello’s that was open for business and full of football fans waiting for the complex area to open. It looked like just the sort of place that one might find a good pair of sunglasses, so off we went.

Once inside we were greeted by several stuffed Deers, moose and bears. The place was huge and being visited by mostly people wearing crimson with numbers on the back of their shirts such as 7, 14 and 85. Drew also had on a Sooner jersey with a large number 85 on it. Linda, dad and I also were wearing Oklahoma clothing. We fit right in. There were only a few Connecticut fans in the place. I remember thinking that either OU fans were going to out number UCONN fans by a lot or that possibly a store like Cabello’s attracted more okies than yankees. There also turned out to be little sunglass stations all over the place. Linda and I went from one to the other while dad and drew visited more interesting displays. There were approximately ten of these sunglass stations and each visit ended in pretty much the same conversation. The following exchange happened about ten times before we finally left Cabello’s minus a new pair of sunglasses.

Linda says “these are all a little too big and the lenses aren’t round enough”.

Erik replies “well maybe try something different, what do you think of these?”

Linda glares at Erik but says nothing.

Finally Linda picks up two pairs and says “Which one do you like better?”

Erik replies “this one” to which Linda says “Really? I like the other one better”.

_Erik says “Oh, well that one is fine too”._Linda “Let’s look at some different ones, I don’t really like any of these”.

After finding our parking spot, we headed to the complex to take in the sights, meet fellow football fans and most importantly eat. We were all starving. We found a burger stand and all of us had the huge cheese burger and fries meal along with root bear. The food was outstanding but the prices were outrageous. Both the complex and the parking lot was packed with people having a great time, talking (trash and otherwise), laughing and generally being jolly. I, being the social type, hopped around from group to group meeting other Sooner fans as well as UConn fans. I met people from Oklahoma, Texas, New Mexico, Connecticut and New York as well as other places that I can’t remember. I am glad to report that everyone was friendly. Drew was taking it all in, I haven’t seen him that excited in a long time, but he wanted to enter the stadium badly. Finally at around 6 PM, I answered the repeatedly asked question “Can we go in yet?” with the affirmative and we got in line to be checked out by security.

The stadium was very large and it almost felt alive. There was a huge ring of shops all around the actual football field where one could buy hot dogs, nachos, pop corn, sodas, beer and all the souvenirs that you can think of. Directly above the field are the seats which also encircle the field. We arrived pretty early and initially the stadium was pretty empty. Honestly it was hard to imagine at first how it would even be possible to fill all of these seats. I’m not sure what the capacity is for that stadium but it looked like it could hold 100,000 people. This is astounding for a person who grew up in a town with a population of 750 people. Soon it was no longer hard to imagine because that stadium did fill up and the noise and chatter was so loud it all kind of meshed together as one thing that sounded like Charlie Brown’s teacher albeit a 2000 foot tall version.

Our seats were exceptional for the price we paid (Thanks Barry). We had a very good view of the field and easy access to the row of stairs that headed back up to the beer stands err I mean the refreshment shops. Before the game started Linda and Drew crept down to field level and took some snapshots of our favorite Sooner players as they warmed up. Linda took some excellent photos that whole week. Drew was ready to pop he was so ready for the game to start. Finally the opening kickoff happened with a boom and it began. The excitement could not have been greater. Just hearing one side of the stadium roar BOOMER and the other side reply SOONER was awe inspiring. The thousands of random voices well now all in sync. The voices piled on top of each other until there was only one voice that was so loud that the opposing team could only communicate with hand signals. When the Sooner offense took the field it felt like silence from where we sat. Little went wrong for our side and our players redeemed past failures and inspired confidence of future success. Landry Jones is no longer the quarterback that struggles on the road. Ryan Broyles cemented his status as the greatest Sooner wide receiver of all times. Demarco Murray proved once and for all that he can play injury free through an entire season with record setting results.  The game could not have gone any better for us. Linda, dad and I could do nothing but smile as we watched Drew cheer on his team by jumping up and down and screaming along with the other thousands of rabid Sooner fans.

Before we knew it the game was over and it was time to head back to the hotel and sleep. This time we were free to do so without worrying about broken down cars or staying up to observe the New Years. We had a great time that we weren’t soon to forget. All that was left was getting home and we took to that task the next day.