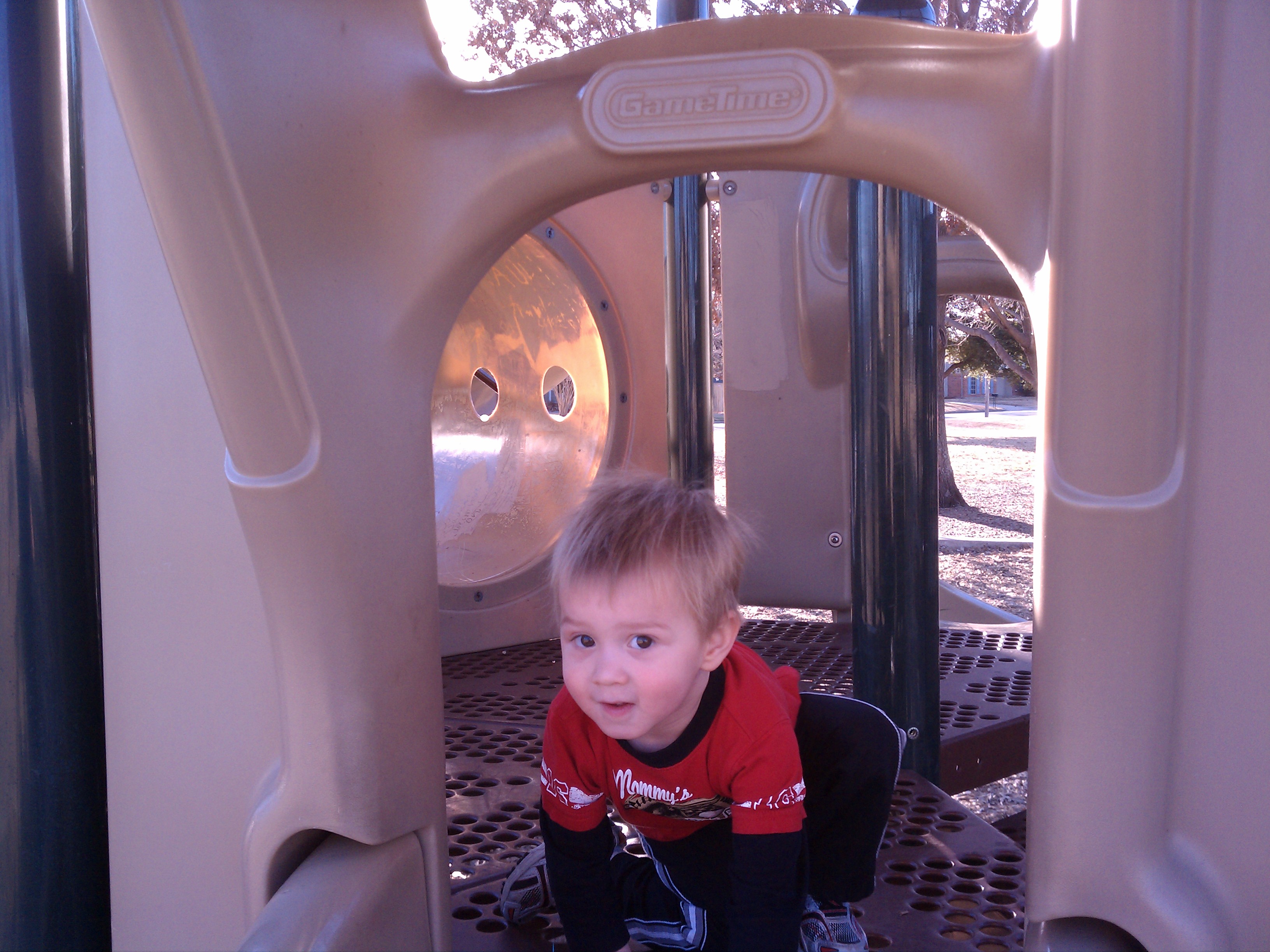 The terms of surrender of private property and personal liberty were never fully agreed upon by all parties. Linda and I, henceforth known as “The parents”, have spent the better part of two years trying to ensure that the life, limb and property of a certain mister Ethan Craddock  remain unmolested, much to his annoyance. He seems to consider himself a prisoner, the reluctant prisoner.

A few months ago an incident occurred that made us painfully aware of the drastic measures which needed to take place. I won’t go into all the details but while one of us was away and the other was in the restroom for mere moments, the little guy made his way out the front door and down the street. Apparently, one of Drew’s friends had knocked on the door and Drew unlocked the dead bolt and opened the door to inform them that he couldn’t play at the moment. This was just the break that Ethan was looking for and he bolted out the front door as soon as Drew turned his back. He made it half way down the block only to have his escape thwarted by our next door neighbor who returned him home and was later nominated for sainthood. The entire incident could not have lasted longer than five minutes but the thoughts of “what if” rattled us both and opened our eyes to what we could expect for the next sixteen or more years. Eighteen month old boys have no place in the front yard without supervision and we became determined to ensure this prohibition. We decided at that moment to make our home “Ethan Proof” a commitment not taken lightly and surely not easily accomplished.

Our plan of action was threefold education, elevation and physical barricades. First we informed the child that all doors in the house were to be classified as a solid “NO! NO!”. Violation of the Don’t Open Doors policy was dealt with by force or more commonly known as involuntarily sticking ones nose in the corner. Drew was also reminded and quizzed incessantly about the foolhardiness of opening the front door outside the supervision of an adult no matter whose voice was on the other side. Next all valuable, sharp or otherwise unsafe items were placed on shelves that were higher than 4 feet. Climbing on furniture was strictly forbidden with special attention being placed upon accessing desirable items by pushing chairs up next to their shelf locations. Finally we placed physical barriers in front of all exterior doors as well as deadbolts out of reach to toddlers. I also re-prioritized my intention to read the manual to our alarm system which had a nifty little feature which sounded a loud beep every time an outside door was opened. This feature which was deemed too annoying during the alarm installation four years ago had become a must have four years later.

To be sure the neighborhood excursion of our toddler was not the first time that we had considered denying access to certain areas of the house. Months ago we had purchased what was advertised as baby proof door knobs. These devices were designed to fit around the door handle so that one had to squeeze the handle before it was possible to turn the knob and gain access to a room. We learned pretty quickly that these managed to only lengthen the amount of time that it took him to get in. Typically this was enough time for us to catch him but on more than one occasion we would find that he was in the bathroom attached to the master bedroom usually in the closet hiding. This went from being mildly annoying and kind of cute to being intolerable when once instead of heading to the closet he went  into the shower and tried to put a razor in his mouth. This incident led to a visit to the Home Depot to purchase a new door handle that could be locked from the inside and unlocked from the outside with a key or the equivalent.

So far our precautions have worked to perfection. We are not as worried about him leaving the house or cutting himself with a razor or some other dangerous instrument. In fact our biggest challenge at the moment is keeping a stoic countenance in the face of hilarious queries, observations and other activity that is best not encouraged. Currently the biggest threat to his well being is an older brother that tends to play a little too rough or possibly the dog might finally snap and take revenge for the last year of prodding and tail pulling. That said it would be foolish for us to let our guard down too much. As a reminder that he has not given up on his dream of penetrating the security of mom and dad’s room, a couple of days ago I found him with the key to the door trying desperately to open it. We keep the key on top of the thermostat which is down the hall from our room. He must have been watching us grab it and unlock the door to our room for weeks before he made his move. Although I didn’t witness it, I am pretty sure that he took one of his toys and threw it at the thermostat until the key fell to the floor. When I found him he was on his tippy toes trying to put the key in the hole as his toy lay suspiciously on the floor directly under the thermostat. He was extremely upset and was not shy about it as I took the key from him and carried him away to the living room.

For better or worse, I anticipate a constant game of cat and mouse between the two of us for the foreseeable future. Any advice from any of you more experienced personal liberty violators would be welcome. I would appreciate hearing of your adventures in child rearing in the comments section below.