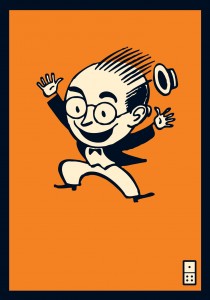 [1][Poke the Box][1] is the first book published by the [Domino Project][2]. The book nor the publishing company is easily categorized. A little bit about the Domino Project. What I am reading is that the Domino Project is going to make it easier and faster to produce, promote and distribute books. This is being accomplished by a partnership with Amazon. It is not exactly clear to me how this is different than any other publisher. Granted I am not an expert in the publishing industry but the books still have to be written, edited, produced and then distributed don’ they? Doesn’t every publisher already follow this model? I am very impressed with the ideas of Seth Godin and have faith that this project is highly innovative and am pretty sure that it’s me that just doesn’t get it.  Hopefully someone out there can explain the difference to me.

Poke the Box is a manifesto on initiative. The ideas in this book are mostly common sense practices that nobody seems to have the sense to make common. Mr Godin urges us to move past fear of failure, ridicule or whatever else may be holding us back and not only start something but finish it.

Like past books such as Linchpin, he makes the case that it is becoming increasingly impossible to succeed by attempting to do things faster and cheaper. Instead he encourages us to stand out, be unique and to take risks. His claim is that the world has evolved to the point to where not risking failure is actually a bigger risk than to attempt something that has never been done. This can never be accomplished without, to use his term, shipping.

Shipping is the act of distributing whatever product that you have created to the customer. Many of us are walking, talking idea factories. Most those ideas exposure to the world is primarily the “what if” conversations held over lunch or some other social situation. The book suggests that these ideas don’t make it past the lunchroom conversations because the person with the idea is waiting for someone to give them permission to take the next step. Once they have permission, procrastination or supposed realism prevents them from actually taking a chance. People seem to require support from ,investors, employers or some other authority figure in the form of money, marching orders or encouragement  before they will take action. Ironically, inaction is more likely to cause the very results that they intended to avoid in the first place.

Essentially the entire book is a manifesto expressly giving the reader the permission to not only begin but to also finish and ship the ideas that they feel passionately about. As a person who exists with a constant barrage of noise constantly flowing through his head, the idea of focusing on an idea to completion is both obviously logical and terrifying at the same time. I am the textbook example of the ambitious individual who has started a million projects and finished none of them. This book, even though it may not have been the intent, has caused me to understand that my behavior is a permanent trap. It will not be until I choose and focus that I will be able to make progress.

Poke the Box is a short book that should probably be shorter. The primary point, which is that starting on something only has meaning by finishing it, is made early and often. This does not take away from its value in the least. The repetition is unnecessary to most but I must admit that reading the last page was disappointing as I didn’t want it to end. I believe that if everyone took these ideas to heart the world would be a much different place.