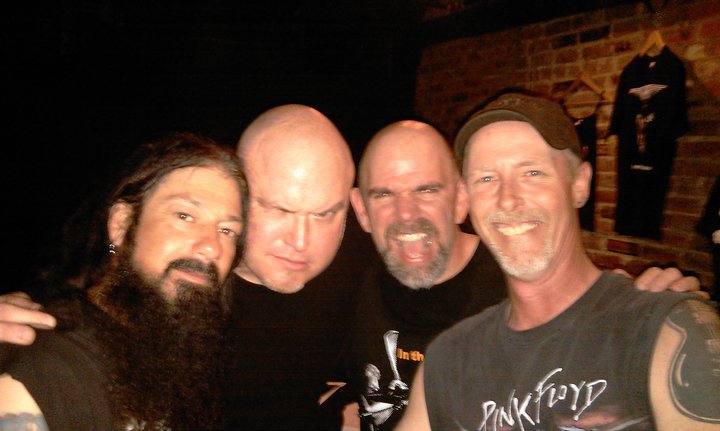 It’s not often that Linda and I have a night without the kids so having a full weekend to do what we pleased felt very foreign indeed. This all came about thanks to a late 80’s metal band. Let me explain.

For Christmas, instead of adding to the ever increasing pile of toys, trinkets and equipment in Drew’s room, we decided to give him three months of Drum lessons. I scoured the internet looking for the best instructor I could find that wasn’t too far away. Eventually with the aid of a music instruction head hunting company I found the perfect drum instructor. I think Drew was a bit disappointed at the time because there really wasn’t anything for him to open. He basically received a card that informed him of the gift. However, it didn’t take long before his opinion changed drastically. Drew is taking to drums like a fish to water with a lot of the credit going to his instructor Scott Rainey.

One of the many impressive items on Scott’s resume is that he was the drummer for a heavy metal band in the late 80’s named Disciple. Back then his band was a pretty big deal in the Dallas / Fort Worth area where I live. I was also impressed to learn that they toured with the band Pantera of whom I was a pretty big fan.  One of the clubs that his band frequently played at was called the Basement. As it turns out Trees in Dallas decided to have a reunion show for a lot of the bands that used to play at the Basement and Scott’s old band Disciple was invited. Scott in turn invited Linda and I to attend the Disciple Reunion.

Obviously a night club that caters to the desires of heavy metal music connoisseurs is probably not the greatest place for children. If we wanted to go, our first mission would have to be getting rid of our pesky kids. Linda met my parents half way between our house and theirs in Wichita Falls, Tx and made the exchange freeing ourselves a whole weekend to behave irresponsibly. I went wild. I took all the baby gates down and rebelliously only latched the bottom dead bolt which only a day prior could have resulted in the unthinkable.

Saturday night we took the hour long drive to Trees in Dallas and went inside not exactly sure what to expect. We arrived at about 8:30 PM before the crowd was very big which allowed us to find a good place to sit. The club is bigger than it looks from the outside. The bar was easily accessible and the stage was visible from almost everywhere in the building. There were two levels with the top being where Linda and I settled sitting comfortably enough on bar stools with a clear vision of the stage. A little further down from us was a door marked “band members only”, however, the rule didn’t seem to be well enforced. All sorts of interesting people went through those doors, some of whom we later saw on stage and others not.

Most of the bands that we saw would have been called “hair bands” had age not confiscated their hair. A couple that still had hair might not have come by it naturally. Much to my amusement some of the singers could still hit those high notes. However many of them seemed to just be reliving the glory days and several were staggering around drunkenly before they ever made it on stage. It would be a crime not to mention the singer of Hill Billy Orchestra who was a huge man that required the use of a stool due to his size. Nevertheless, he was quite animated on his stool and managed to keep me in stitches the entire performance. At one point he pulled out a Cheech and Chong sized blunt and alternated between mock smoking and playing it like a guitar. Another notable performance was the beer bellied singer who strutted around without a shirt acting like a horribly misguided sex symbol. When he wasn’t pelvis thrusting in the general direction of the audience he was falling into his guitar player who managed to anticipate his drunken blunders as if he had experienced this many times before. Even with some of the hilarious antics all the bands played well and a good time was had by all.

Disciple was slotted to play at 10:30 PM. The bands that played before them were mostly your classic pop metal hair bands of the 80’s with upbeat tempos and party themed songs. One of the bands even played an acoustic set. Having heard a couple of Disciple songs in the past, I knew that anyone expecting more falsetto Judas Priest like screaming were in for a huge ass kicking.  Finally Disciple took the stage and the pummeling began.

Dan Lehmann looked pissed like he was just waiting for someone in the crowd to cross him. He is a big guy with a shaved head. The way he doubled gripped the microphone and screamed out the lyrics gave you the impression that you’d be best served by listening and paying attention. Al Ward who has been a constant fixture to the Deep Ellum music scene for quite some time shredded the guitar like the professional that he is. The riffs he played were dark and relentless. In the past Disciple had been a three piece band with Dan playing the bass along with his singing duties. This time however, in order to allow him more freedom on stage Todd Heazux was asked to play along with the original lineup. He performed his duties with precision despite only having practiced with the band for a few weeks. Finally there was the reason we were there in the first place.  Scott Rainey’s drums were a steady eruption of double bass madness. It’s difficult to comprehend how it is even possible to move ones arms and legs as quickly and methodically as he did.

The music of the preceding bands offered little warning for what happened when Disciple took the stage. Some of those bands seemed like a group of has beens trying to relive the glory days. Not Disciple, they seemed more like serious musicians determined to be heard and respected. I am personally extremely impressed and honestly quite shocked that this band didn’t take over the world back when they were first touring. After hearing them live I wouldn’t be surprised in the least if that injustice were not rectified soon.