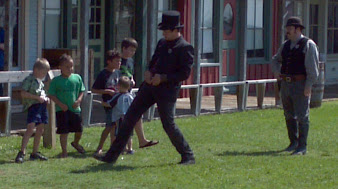 Day one of our trip to see Yellowstone had finally arrived. We could not have been more excited. Linda, Drew, Ethan and I arrived at my parents house in Anadarko, Ok on Sunday just in time for lunch. Dad and I began pre-departure inspections and were immediately faced with a dead main battery. We were able to get it started with a jump and after some fiddling determined that everything was fine. Next we climbed on top of the vehicle in the blistering heat and cleaned out the air conditioning system filters. Everything checked out great. The only thing left to do was attach the tow dolly and hook up mom’s Kia Serento. This would allow us to pull out early the next morning and head to Wichita. Not everything works out as you plan.

Dad pulled the RV up as close to the road as he could as I pulled the tow dolly up to the rear. I hooked up the dolly and dad drove the Serento up on it. Now it was time to secure the vehicle with tow dolly straps, except our straps were too small. We loosened them as much as possible but it wasn’t enough. I began calling everywhere I could think that might have larger straps. Half the places I called were closed on a Sunday afternoon. Although it would mess up our time, we decided that we would just have to wait until after businesses opened up the next morning.

The next morning at about 8 AM, dad and I headed over to McDuffy’s Auto Parts and found straps long and strong enough to secure the Serento to the dolly. We were on the road by 9:30 AM and in Wichita to pick up Dylan by 2 PM. After visiting with my sister Stephanie for a bit we got on the road and headed to Dodge City, KS.

Dodge City, KS was founded in 1872 and was a major shipping point for cattle in the old west. With the cattle came the cowboys who were mostly young, single men seeking adventure. It wasn’t long before Dodge City also became one of the wildest places in the old west. Several famous lawmen such as Wyatt Earp and Bat Masterson did their time fighting crime in Dodge City.

While we were in town we visited the Boot Hill Museum which has a historically accurate replica of the old Front street. The street now doubles as gift shops and a museum. Despite their earlier claims of only liking modern guns, Dylan and Drew were overwhelmed by the glass encased gun collection on display. They posed in front of the windows in mock duels and were as excited as I saw them all week. The museum featured many antique items from Dodge City’s glory days. Out back, at the top of a hill was the old cemetery which included several old graves. Many of the graves with simple wooden gravestones had epitaphs such as “Edward Hurley, shot Jan 17, 1873. He drank too much and loved unwisely”. Another one read “A buffalo hunter named McGill who amused himself by shooting into every house he passed. He won’t pass this way again. Died March 1873”.

We all had a wonderful time on Front street. In addition to the museum, there was also an antique shop, an authentic saloon and even an ice cream parlor. We sat inside the saloon drinking sarsaparilla while watching can-can dancers as we waited for the main attraction… the old west gun fight show. The gunfighters would have a showdown at high noon obviously. Before that could occur, the boys would need to be deputized just in case anything happened to the sheriff. The sheriff lined them up and explained to them their duties. He made them swear their allegiances as well as several other important oaths such as “cleaning their rooms” and “listening to their parents”.

It was finally time for the gun fight to began. Cowboys swaggered, bad guys behaved slyly and guns flared. Watching the kids with mouth agape was almost as much fun as watching the show. Even Ethan quit squirming and attempting to jump in mud puddles during the performance. After the gun fight was over, the boys took a group picture with all of the performers and bought souvenirs from the gift shop. We were still hearing about cowboys for days. I noticed more than one duel in the next few days as well.

After retiring back to the Gunsmoke RV park, we got a good nights sleep before moving on. With Dodge City in our rear view mirrors we headed west on highway 50 until we reached I25 and headed north to our next destination, Colorado Springs, CO.