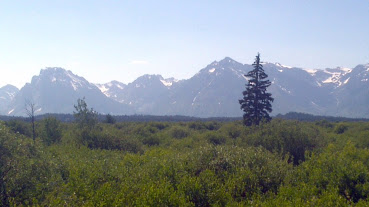 The terrain of the United States is a complete wonder to me. The aesthetic difference of the east coast from the west and everything in between is like night and day. It varies so much that it is hard to believe that it is all part of the same country. I believe it to be true that we are in part products of our environment. My upbringing in a small peanut and cotton farming community has vastly shaped my view of the world. I can only assume that this is true of everyone.

I spent the last ten days visiting a small section of the country. I have returned amazed that we have even as much in common as we do. I found myself asking over and over again “Could I be happy here with…” (insert unique geographical attribute). When I met people I couldn’t help but try to imagine them living in Caddo county. Sometimes it was more plausible than others. It didn’t take much effort in Kansas.  However, the people who spent the winter in West Yellowstone, Mt might have found Binger a bit stifling.

The idea to visit Yellowstone National park was my father’s.  He had fond memories of visiting the park when he was a boy. His oldest brother lived in Washington at the time and two other brothers were temporarily staying in the northwest with friends. My grandparents decided to take the opportunity to both visit their son and return their other boys home. At the age of seven, this was a grand adventure for my dad and he never forgot it. It didn’t take much for him to convince me to come along.

At a month shy of ten years old, my son Drew is at the perfect age for this sort of gig. However, no young man can fully enjoy an epic adventure such as this without a running buddy. Thankfully, his cousin Dylan was more than happy to accept the challenge of conquering the road. Conquest was the last thing on Linda and Mom’s mind. They were excited to see the different destinations, but roughing it was out of the question. Our youngest adventurer, Ethan aged two, was game for anything as long as there were plenty of new experiences and/or things to destroy.

A cross country RV adventure was the perfect solution. It allowed us to gain access to remote locations at a somewhat reasonable price. All of this could happen without giving up many of the amenities that we were accustomed to. Dad began planning the trip and we were set to leave June 3rd which was the second week that the park fully reopened after the winter.

The intention was to leave early Saturday, pick up Dylan and spend our first night in Dodge City, KS. The next day we would take in a couple of sites and continue on to Colorado Springs, CO. During our two planned days in the Rockies, we would scale Pikes Peak and maybe do some white water rafting. Next we would spend two days on the road and finally land at Yellowstone National Park. After four days of watching bear and buffalo and gawking over mud bubbles and geysers we would head home. The drive home would be a straight shot only stopping for bathrooms, food and sleep. These plans were doomed for several reasons.

Before embarking on a trip across country mom and dad thought it wise to make a couple of shorter test runs to get a better idea of what to expect. The first realization was that without full hookups the RV was pretty much just a fancy tent. There are holding tanks for drinking water or refuse but those quickly become empty or full with much use. There are ways of getting around these issues but most of them are more expensive than paying for full hookups. Speaking of expensive, the RV also has a gas powered generator for electrical equipment. I don’t think I need to remind anyone of how expensive gas is these days.  It didn’t take much to decide to follow the full hookups. This led to the next realization. RV parks in popular destinations during vacation periods fill up quickly. To ensure full hookups we would need to make reservations.

Before we knew it, the time for our vacation had arrived. I had taken off work for two weeks and we were all excited to hit the road. There was only one snag, it was still snowing in Wyoming and many of the roads to Yellowstone were still closed. There was only one reasonable thing to do… put chains on the tires of the RV and go anyway. After this idea was quickly vetoed, we decided that it would be best to reschedule our trip to the end of July. We were all a bit disappointed but it was the best decision and we were all glad of it later. The thought of hot rod Larry driving a 35 foot RV through the snow covered mountains still makes me a bit nauseous.

The delay allowed us to reassess some of our vacation destinations. For instance, a train ride over Pike’s Peak might be a blast for adults, the children by all accounts would find it extremely boring. We decided on the more kid friendly Cave of the Winds. Also after much consultation from more experienced travelers, it was decided that we should limit the number of driving hours to six. This along with a desire to visit Mount Rushmore on our way home limited our time in Colorado springs to half a day instead of two. Keeping this all in mind, mom took the lead on making reservations at RV parks while dad focused on readying the vehicle for its upcoming journey.