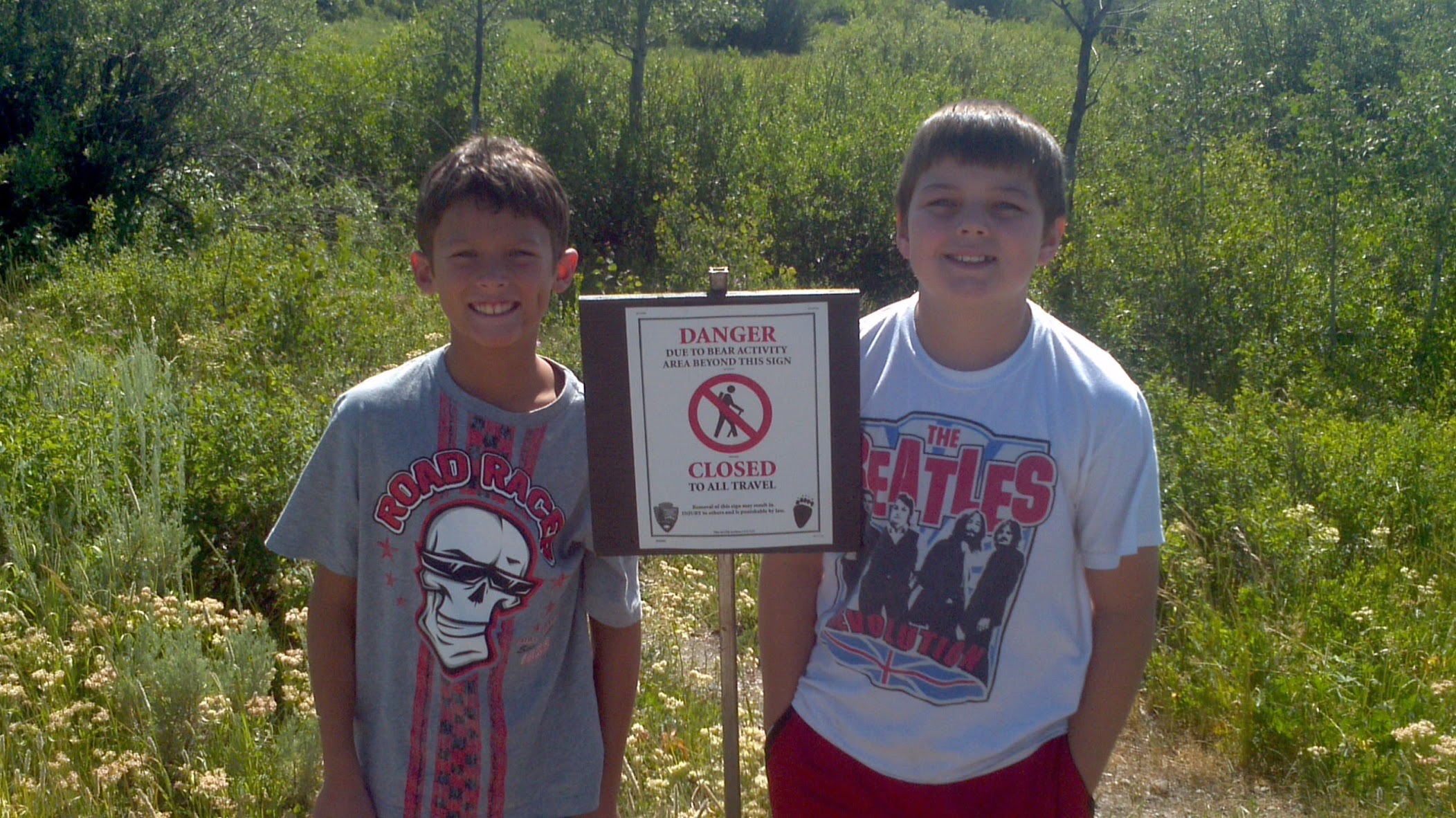 Driving through Wyoming is like touring a spaghetti western movie. At any moment I expected traditionally dressed Arapaho to come riding out on horseback. Dylan and Drew peered out the window, one of them exclaimed “this looks like Red Dead Redemption”. This truly was a perfect picture of how I have always envisioned the Old West high plains. This describes most of the terrain of Wyoming, that is until one reaches the mountains.

We entered Yellowstone National Park from the southern entrance which took us first through Grand Teton National Park. This was our first real experience driving through the mountains in an RV. From where I was sitting, the RV looked too wide to co-exist on the road with other cars. Every time we passed another motor home I was sure there would be a collision with one of us rolling down the mountain. At one point on the drive in there was construction on the road. So here we are in a 35 foot long RV. It seemed as wide as two lanes. We were towing an SUV while driving on a dirt road on the side of a mountain at somewhere around 8000 feet above sea level.

I should have been terrified. Instead, I couldn’t take my eyes off of the scenery. It was absolutely amazing. Imagine looking down on an untouched forest that stands next to a lake as big as an ocean with a snow peaked mountain range off in the distance hovering like an apparition.  We had just spent our longest day on the road yet. We were all exhausted from being in a vehicle for too long. However, the mountains seemed to revive us. Suddenly instead of dreaming of showers and feet on the ground, we started thinking about grizzly bears and Old Faithful.

We did drive right past the road to Old Faithful that first day. We saw the historic Inn to our left but we decided to use good sense and save sight seeing for the next day. We pushed on until we finally arrived at our destination, West Yellowstone, Montana. Unfortunately the RV park where we had reservations was the worst we would have the entire trip. It was crowded with the lots packed closley together. It was not as long as advertised and we had to remove the tow dolly and push it up against the side of the RV so that it wouldn’t hang out in the road. To make things worse the bathrooms weren’t very nice and the employees at the front desk were not friendly. It was a good thing that we didn’t intend on spending too much time there.

West Yellowstone, Mt is a neat little tourist town that sits right on the west entrance of the park on the Montana / Wyoming border. There were dozens of little gift shops, restaurants and museums that were all within walking distance of our RV park. That first night Linda, Dylan, Drew and I took a stroll to the general store to pick up some groceries and to get our first glimpse of the town.  For a town whose sole purpose is to cater to tourists, the residents were stand-offish to tourists. I can imagine that a steady stream of strangers who constantly expect you to answer questions about the park could get a bit annoying. I was more interested in how they dealt with the weather. I managed to strike up a conversation with the couple who ran the general store. The gentleman, who lives in the town year around, told me that it got 40 below this last winter. The woman, who I assumed was his wife, informed me that he spent the winter there alone.

I felt like a kid that night. I was too excited to sleep. In my dreams, herds of buffalo stampeded across the plains with wolves chasing them. Just as wolf was about to catch one it was snatched up by a grizzly bear. We would spend the next two days trying to take in as much of the park as we could. This would be juggled with trying to keep Ethan alive and the rest of us sane.