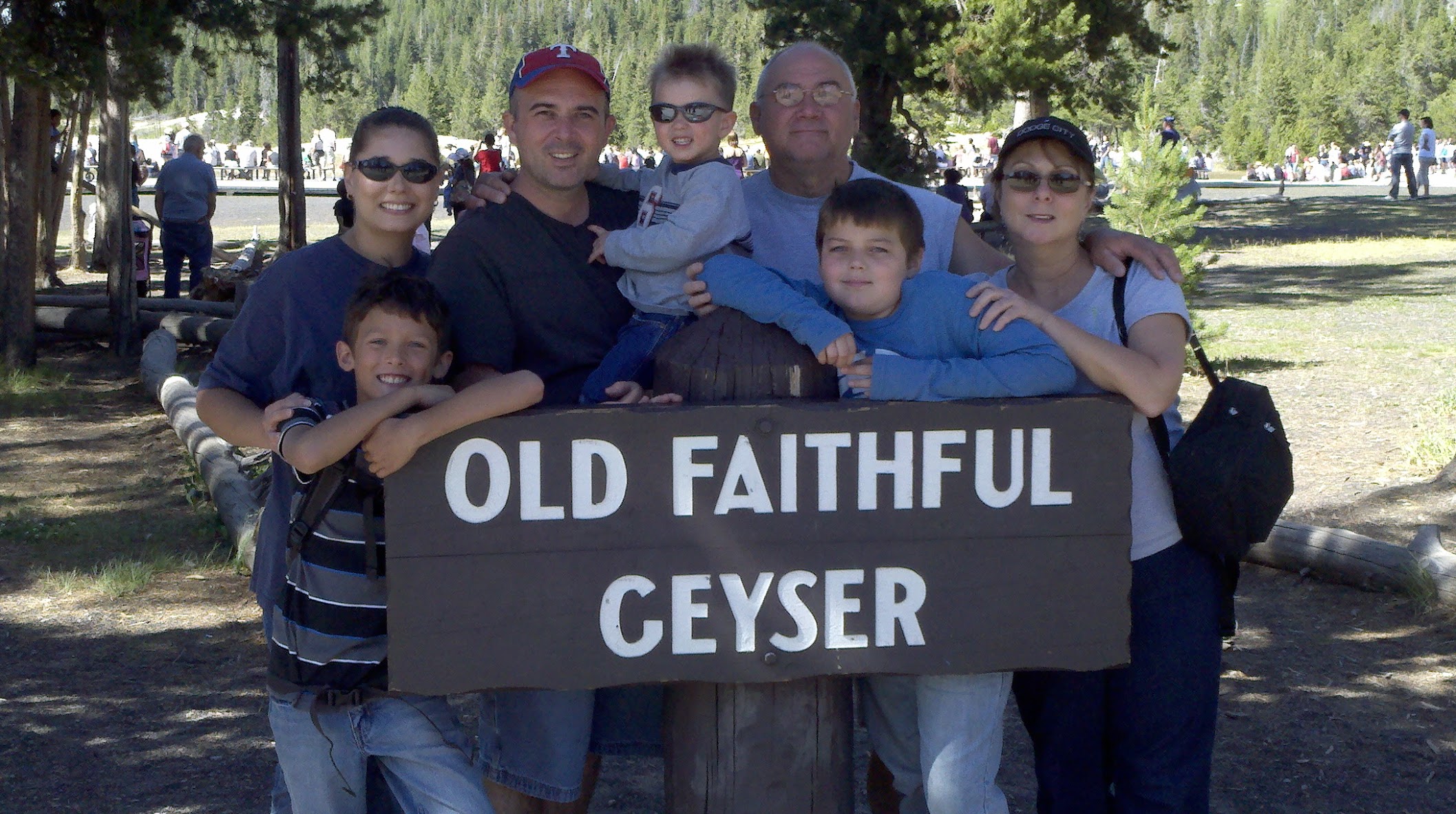 After travelling through five states in four days, we were finally at our destination, Yellowstone National Park. By this time we had a well established morning routine. At around 6AM, dad would come tip toeing  through the RV attempting to exit without waking the boys (especially Ethan). I would get up and follow him out. We had a coffee pot pre-prepared the night before ready to be brewed. By the time it was ready, mom would join us also in need of caffeine.  Eventually Ethan would wake up and of course it was unthinkable that anyone should be asleep while he was not. After converting the hideaway bed back into a couch and reassembling the table, we would all have breakfast. On this day in particular, there was no moaning or slow footing. Everyone was ready to finally begin our exploration of the park. Ethan again reminded us of his intense desire to see a bear as a flurry of destination requests came from the older two boys. We packed up in the Serento and made our way into the park. This scene replayed itself every morning for the next two days.

Yellowstone National park is huge. It encompasses 2,219,789 acres. That would be nearly 3,470 square miles. Seeing the entire park is virtually impossible as most of it is undeveloped and untouched by humans. We decided early on to avoid guided tours and instead drive around the park looking for interesting sites on our own. We did this in an effort to see as much as we could in a short amount of time. There are two primary roads that loop around the park. The Grand Loop circles the northern part of the park. The Grand loop passes by Norris geyser, Mammoth Hot Springs, Roosevelt Lodge and the Canyon Village center. The other loop is much longer but it hugs the northern edge of Yellowstone Lake. It also passes next to Old Faithful and the Old Faithful lodge.

One of the things that became evident pretty quickly is that Yellowstone is a very strange place. Steam spewing out of the rocks everywhere, boiling water next to creeks and bubbling puddles of mud are not normal. Not to mention water geysers everywhere you turned around. It didn’t take long for me to put two and two together. All of the oddities that make Yellowstone interesting are made possible by seismic activity. The whole park is sitting on top of one huge super volcano. Apparently, it is one of the largest volcanoes on earth. Scientists have discovered that it erupts approximately every 600,000 years and the last eruption occurred about 640,000 years ago.  If this sounds a bit disturbing don’t worry about it too much and definitely don’t cancel your Yellowstone vacation plans. That is unless you live on another continent. If Yellowstone erupts and you live in North America you are in as much or more danger than if you were in the park. The ash alone would cover the ground as far east as Iowa, the sun would not be visible for several years and most of us wouldn’t survive anyhow.

I feel that it’s important to point out that our primary goal was to see a bear. Any wildlife was  a welcome sight, however nothing compared with spotting bears. Ever since seeing the life sized stuffed bear in the gift shop at the Cave of the Winds, Ethan could think of nothing but bears. As we made our way through dense forests, hiked along dirt paths or drove up winding mountain roads he chanted about bears. The boy was obsessed. Thankfully there were lots of really cool things to see as we hunted for bears.

Along the way we viewed boiling springs, boiling puddles, steam rising out of rocks and water spewing out of the ground. Raised planks of wood were laid out over the ground with sporadic signs warning us of the dangers of getting too close to just about anything. The ground around springs and geysers were an assortment of colors. The whole area looked like someone had painted it with crazy designs. It was hard to believe it was real. There were ponds filled with boiling hot water. These ponds had streams with boiling water reaching out for larger creeks. At one point we saw boiling streams that flowed out into a small canyon with a creek at the bottom forming a boiling waterfall. It seemed everything boiled including our temperament a few times after having spent so much time in close quarters.

Early on we made our way to the most famous geyser at Yellowstone, Old Faithful. It was a very popular location indeed. For some reason I was unprepared for the huge concrete parking lot and shopping mall that surrounded the geyser. There had to be a thousand people all visiting the complex which contained the Old Faithful Inn and restaurant, along with a gift shop, an ice cream parlor, cafeteria, museums among other places to visit. Old Faithful erupts approximately every 90 minutes. The interval used to be about every hour but has increased over time due to earth quakes. We all crowded up near the geyser with all of the other tourists and waited with video cameras alert waiting for it to spew water and steam into the air.

As Ethan mumbled alternatively something about bears and wanting down, I spent the time people watching. There were all sorts of tourists from all over the country. There were mothers, fathers, grand parents and children of every nationality. Boy scouts marched along with their troops. Families scuttled by speaking languages I didn’t understand. However, as much as I like to think that I am unique, I have to admit that there wasn’t much that distinguished us from every one else. We were all rubberneckers gawking at an anomaly of nature that could turn deadly on us at all at any moment. As I looked at the beautiful scenery, I could only describe it as majestic. It was hard for me to justify the fact that I was destroying part of it by just being there. It’s as if in order to gain the perspective necessary to appreciate the beauty of something we must destroy part of that beauty. I wonder how many other things in life this applies to. Old Faithful finally erupted and like the other tourists we took pictures and videos of each other standing in front of it.

Did I mention that Ethan had become obsessed with bears? Thank god for the Grizzly and Wolf Discovery Center in West Yellowstone, Mt. After failing to see hide nor hair of a wild animal our first day, we decided to visit the museum. It was the home of half a dozen grizzly bears and a small pack of wolves. The curators of the museum are nice enough to take in the animals who take to human company to easily. Once a bear gets a taste of picnic baskets they can never go back. Bears and humans in close proximity is never a good thing and can lead to the death of one or the other or both. We walked through the museum and saw several stuffed bears. Of course Ethan was attracted and terrified at the same time. Afterwards we went out back and saw at least 4 or 5 full grown wolves lounging in the sun. The main attraction were the bears. Before they were let out, several kids accompanied by rangers strategically placed large pieces of meat out. After everyone was safely back outside, the bears were let out and we were all able to see them feed.  The grizzly bears were huge. I can’t imagine what would happen to my bowels if I were to see one up close and unpinned. Unfortunately seeing live bears only increased Ethan’s interest in them and if anything we heard more about bears.

We spent a good portion of our time just driving around the park. If we came upon something that looked interesting than we stopped. We tried not to get in a big hurry. One of the coolest things we saw were waterfalls. We saw several of them. Some were plainly visible from the main road. Others we had to hike a ways to see. While visiting one of these waterfalls we met a neat couple. Adam and Christy Coppola are a young couple who are riding their bikes across the United States visiting every state on the way in one year. I was a bit embarrassed complaining about a 200 yard hike to the waterfall after hearing about a 11,000 mile bike ride.  That sounds like an awesome adventure to me. I’ve been following them on their adventure ever since at giveabike.com.

Anytime we saw anything that resembled a road that separated us from the main road, we took it. We saw some of the best scenery this way. As we drove down one of them we came upon a mini traffic jam and sure enough there was a bear! There were several people all huddled together behind a car a little ways down the road. They were all taking pictures of a wild bear. After evaluating the other tourists, I was convinced that I could outrun them all. This gave me the courage to join the huddle and start taking pictures too. If the bear decided to attack, I figured I didn’t have to outrun the bear just the other tourists. Finally the cars in front of us decided to move on, so I scurried back to the Serento. After all this time Ethan would finally get to see a bear, except HE WAS ASLEEP. Typically we count it a blessing when the boy is asleep, this time we woke him up. He was so excited!

With our primary mission accomplished, it was time to pack up and prepare for our 1400 mile trek back home. We decided to take a route through South Dakota and Nebraska on our way home. This would take us through the Black Mountains and Mount Rushmore but first we had to cross the Bighorns and the steepest road we would travel yet.