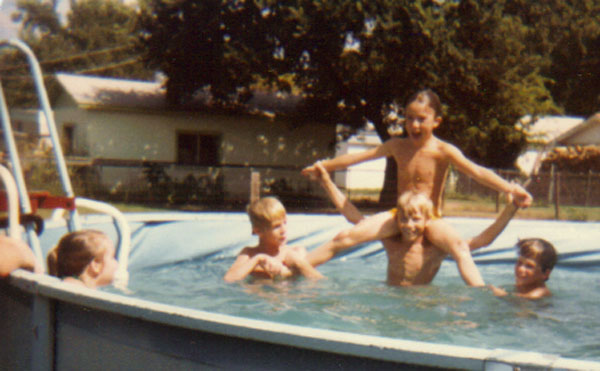 We ate dinner at seven o’clock. We ate dinner together as a family, at the table, mom’s rules. My spot was at the end of the table directly in front of a wall heater, a prized location in the winter. I sat to the right of my brother Pete and across from mom. This was not some somber formal dining ritual. This was our daily family reunion after a busy day of school or play. Most of time, it was the first chance we had to really talk to each other all day. I don’t remember our house ever being quiet but then again I spent as little time in the house as I could. It was boring in the house. My room? That was the place they sent me when I was in trouble. I spent as much time as I could outside playing with the neighborhood kids.

When I was about eleven years old (my son Drew’s age), my room consisted of a bed and a dresser for my clothes. I don’t remember having much more than that, although I’m sure my mother would disagree. The truth is that I can’t remember my room very well at all. I don’t think I used it as much more than a place to sleep. I would just concede a bad memory except that I remember other details of my childhood vividly. I remember that we had an old broken Volkswagen bug at the back of the yard. The engine should have been in the trunk but it was gone. I almost got stuck in it one time. We boys usually used it as “the hill” in king of the hill. We had a tree in the backyard with the long rubbery stalks that were the source of endless entertainment and bruises. I was having trouble describing the tree so I thought I’d ask dad.

Me: hey dad what kind of tree was that in the back of 708 next to the pole?

Larry Craddock: I don’t know what those are called … it had beans on it

Me: lol those things were beans? I thought it was a sword tree. 🙂

There was another tree next to the house with a big branch that always threatened to brush up against the house. Dad always seemed to be trimming it. I would climb the tree and jump on to the top of the house. There were actually several routes to the top of the house, the most fun being the fancy metal poles that held up the roof on the covered porch. It was harder to get down but usually I just jumped. It’s amazing that I never broke a leg, it had to have been eight foot to the ground. I definitely remember the moped that we had at the side of the house. I’ll never forget the injury I received when a friend turned the pedal while my finger was in the chain.

Before we became members at the Regency pool, we had an above ground pool in the back yard. We had lots of fun trying to drown each other in that pool. We would have competitions for how long one could stay under water. I was the king, I could swim three full laps under water without coming up for air. At one point, dad built a tree fort around the bean/sword tree. I used to climb up into that fort and use it as a diving board into the pool. There was also a T shaped metal pole that was meant to support a clothesline that was utilized as a diving platform. The pole was right next to a chained link fence. The top of the fence came up over the support bar and functioned almost like a barb wired top. If one managed not to cut their feet up at the top of the fence, you could climb up on top of the pole. This in and of itself was tricky due to dripping wet feet newly covered with grass. If you managed to make it without slipping and busting your ass, you could manage some pretty awesome dives into the pool.

There was no shortage of fun things to do at our house and it was not limited to only the back yard. We also used to play under the house. I can still remember the smell. It was musty with the slightest trace of decomposed carcass. The ground was almost like sand and boy was it dusty. I seem to remember there being chicken wire in front of each entrance, probably to keep animals out. One time a cat climbed under the house and died. Dad had one of us climb under there and drag it out. I think it was Nathan.

We didn’t spend all of our time in the back yard. We were avid bike riders. I remember dad teaching me how perform maintenance on my bike. Maybe it was because I was rough on the bike  but I remember my chain slipping off all the time. I had to learn to put the chain back on. I even had to add a link to the chain once. Flat tires were frequent annoyances. Getting a new tire meant that there was no more room on the old tire for a patch. Worse was that after fixing a flat I had to push my bike to the filling station next to the highway through town to air up the tire.

We rode our bikes all over town. Technically we were supposed to stay in the neighborhood but this rule was easier to give than to enforce. I’ve probably ridden my bike over every square foot of Anadarko, Oklahoma. Once we rode our bikes to Indian City which was a few miles outside of town. Our favorite thing to do was tricks, especially jumping. I was pretty convinced that I was Evel Knievel’s equal. You would think that there would be frequent wrecks and you would be correct. I’ve flipped over on my back attempting the world biggest wheelie. I’ve gone flying over the handlebars attempting a front wheelie. I’ve landed painfully on the frame of my bike so many times that it’s amazing that I have children. I probably have done irreparable damage to my brain from landing on my head without a helmet in bicycle accidents. Thankfully, I never broke a bone. I never needed much more than mom’s hand on my head and a declaration of “BE HEALED” to treat most of my childhood injuries.

Another favorite pastime of my youth was playing football with the neighborhood boys. We took this very seriously. I was Walter Payton on offense and Brian Bosworth on defense. Helmets and pads were for sissies. I had never even heard of flag football and probably wouldn’t have understood the point of playing without tackling. We didn’t really play games, it was more like we played until everyone had to go home. If you weren’t bleeding a little by that point, you weren’t trying hard enough. There were no refs, everyone was responsible for identifying any penalties committed against them. Without the aid of instant replay, you would often have to resort to blows to get the correct call. Football almost always led to fights. Come to think of it lots of things led to fights.

Looking back I think we just enjoyed fighting. We fought all the time. Friends, enemies, strangers? It didn’t matter eventually there would be a fight. I don’t even remember being angry half the time. We just fought, if not with each other then we’d find someone. Getting into a proper fight took work sometimes. To facilitate the process we learned to insult each other. There was an art to spouting out insults. There was an appropriate insult for most every situation. There were insults of greeting, playful insults, comeback insults and the list goes on. There were certain insults that had to result in a fight if you have any self respect at all.

No insult was complete without a proper cuss word. My friends and I went to great lengths to cuss properly. It was necessary to have the proper inflection with just the right amount of emotion. If you weren’t careful a comeback insult could be misconstrued as a playful insult, vice versa, all because you pronounced your cuss word wrong. But we weren’t afraid to experiment by coupling different cuss words together. We even created our own unique insulting words and phrases. These worked best for insulting people to their faces without them being the wiser.  I can feel that grin that wells up inside your face threatening to reach your cheeks and give you away just thinking about it. These were my favorites, along with the ones where the victim wasn’t quite sure that they had indeed been insulted.

Suffice to say, I had quite the education that just would not have been possible if I had not spent so much time outside playing with other kids. So I pose the question. Do our kids spend too much time inside watching television and playing video games? How will our children test the limits of their physical well being from the safety of the house? How will they learn to effectively escape adult supervision while sitting in the house or being leashed to portable GPS devices? Are we really going to allow them to learn how to cuss by watching television or on the Internet?

I would love to hear your opinion on the subject. Were you an inside or outside kid? What were some of your experiences?