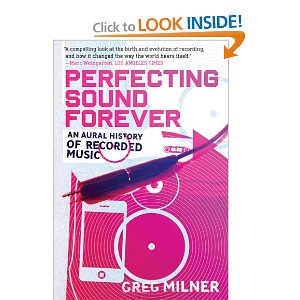 Thomas Edison invented the phonograph in 1877 in an effort to accurately record sound. He aimed to create a device that could document what was heard much the same way a photograph documented what was seen. It didn’t take long until it became apparent that the primary draw of the phonograph was not to document sound but to be entertained by it.

By the early 1900s, the phonograph was beginning to show up in private homes. People wanted to listen to music. Edison’s phonograph found that it had a real competitor in the Victrola. The phonograph with its cylinders had superior sound quality to the Victrola discs. Victrola discs were cheaper and could hold more music. Cheaper and easier to use won out over high fidelity beginning a confrontation that would repeat itself over and over again through the years.

The book Perfecting Sound Forever is essentially a history of these confrontations. It explains the different methods used to record sound by the technology which made them possible. Beginning with the already mentioned competition between the Edison Phonograph and the Victrola and continuing with live recordings of American musicians such as Ledbelly for the library of congress. We read over and over again about the opposition between those looking to perfectly record a performance and those looking to record the perfect performance that never actually occurred.

A major topic is the evolution of the recording studio. As the technology has advanced the tendency has been to improve the flexibility of the recording process sometimes at the expense of the audio quality. Recording equipment has evolved from the first two track recorders all the way up to 24 track dat tapes to finally fully digital software such as Pro Tools. It has changed from the mechanical ear of the phonograph to becoming a kind of instrument in and of itself.

Edison would roll over in his grave if he had seen what his invention had become. We no longer even aspire to accurately record sound. Today an artist at his computer is capable of creating music that couldn’t have even been dreamed of 100 years ago. The funny thing is that we are closer to being able to achieve the pristine world of only capturing the music that he dreamed about now than ever before. Ironically we have come to understand that the noise that surrounds music is the very thing that makes it sound authentic. In a world where computer software allows anyone to create a perfect sound, the recordings that are heard forever are the ones with an imperfect human touch.