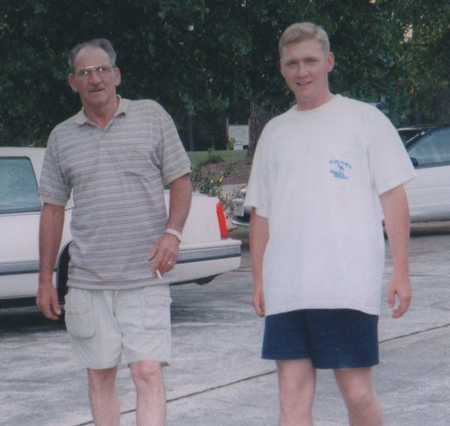 Some things quite clearly belong in this world. They come to us in a variety of different packages. We have experienced them at some point with all of our senses. They are easy to identify. When you see them, even for the first time, it is familiar. The taste and smell is pleasant. You could swear that you’ve heard them before. It just feels right. That is how I perceive art.

The reason that good songs sound familiar is because they already exist. The musician does not create the song, he discovers it. This is accomplished by a process of elimination. Revise, Play, Destroy. Repeat this process until the noise gives way to music. There are an unlimited supply of songs out there just waiting to be discovered. They are rarely found with ease. There are no more free standing pools of songs for Jed Clampett to discover with a mere shotgun blast.

Otis Ray was not discovered quickly or easily. We started over several times. We made every mistake in the book and nearly quit. Without a sense of accountability to each other, I am convinced that we would have quit. A few other things saved the song. It’s content has obvious sentimental value that we were reluctant to give up on. Also we told ourselves from the beginning that we were not in a rush, so there was less pressure. The biggest reason, in my opinion, was that we took a break in the middle to record an easier more lighthearted song. We came back to the Otis Ray project with some confidence.

The song began with Rodney writing verses about his father, JW Craddock. These were mostly his childhood memories. He planned on writing a song for his dad. He was a bit reluctant to show me the unfinished lyrics. I offered to help put them to music so he relented. I read them and knew immediately that this would be a great song. However, it needed changes. I was a bit nervous to make suggestions since it was so personal. For instance, initially all of the lyrics were written about his father. I suggested that the words be directed to him instead.

My other lyrical contribution was the title. Initially the song was called “The Old Man”. The title didn’t sit with me well. I asked Rodney for any nicknames that his father had. He told me a story about a boxing match they had watched together years earlier. The bout was between one boxer named Odis and another named Otis Ray. The fight quickly turned into a comical back alley brawl as the fighters began trading low blows. From that point on, Uncle JW began calling Rodney Odis which of course resulted in him being dubbed Otis Ray. It stuck. Years later, they were still calling each other by the nicknames, nearly forgetting the reason.

I am a collector of ideas. I keep lists. I have lists of short stories I want to write. As I have mentioned before I collect potential song titles. I have lists of books I want to write, products I want to create, businesses I want to start, etc. I also keep quick and dirty recordings of melodies, riffs and other musical ideas. The titles I give these recordings range from a sort of onomatopoeia like ‘blee blah duh’ to what instrument it was recorded with. The name I gave to the riff that became Otis Ray was ‘some acoustic new’. It barely resembles the song we ended up with.

I took the lyrics that Rodney gave me and I applied them to the music that I had previously recorded. I took my favorite two verses he wrote and transformed them into a pre-chorus and chorus. As usual, I recorded a demo with me playing the guitar and singing. After crossing my fingers, I sent them to Rodney. I wasn’t sure what to expect. It could have gone several ways. He could have been offended or worse apathetic. To my relief he loved it. Of course there were several changes that he wanted to make, mostly to the lyrics. He did make one major change to the way the chorus was structured. With his improvements, we had ourselves a song.

In hindsight, our first mistake was basing everything around a guitar riff. In theory one should be able to play with a metronome and everything would be in time. In practice, that doesn’t work very well. We had a completed song that sounded ok, but something just wasn’t right. I would focus on my parts and hear little mistakes here and there. I would re-record my parts and send them to Rodney. He would do the same. I kept telling myself that the problem was with the mix or some other technical issue that I was inexperienced with.

In the meantime, I had begun recording another song, Bad End to a Good Time. This was done during a period of time when the work on the Otis Ray project was in Rodney’s court. When I was working on Otis Ray, he would work on Bad End. It was becoming obvious that Otis Ray was going nowhere. It still just sounded wrong. For a time it appeared as if ole Otis Ray was destined for a life of receiving low blows in a back alley brawl. We ended up finishing Bad End first. There was a moment right after we pushed out the song that we nearly abandoned Otis Ray. Ironically, it was saved when we decided to scrap everything and start over.

Rodney had been working on the project for a couple of weeks. He had recorded, erased and re-recorded every track he had originally created. It still didn’t sound right. He finally threw his hands up and gave me everything he had to see what I could do with it. I did the same, I re-recorded my parts but something was still off. I finally determined to get to the bottom of the problem. I began listening to tracks. The rhythm guitar and bass were good together but when I listened to them individually with a metronome they were off. It finally occurred to me that the issue was that every current track had been recorded along with the bass. The bass however had been recorded to match the original riff which had long been erased. Guitar riffs are rarely precise. In fact what made this particular riff good in the first place was it’s “looseness”. Riffs are meant to be played along with a backing track not vice versa. To top it off, I wasn’t even playing it the same anymore. With a sinking heart I realized that the we had to start over completely from scratch.

This time I recorded a rhythm guitar backing track first. I made sure that I had no timing issues. I sent it to Rodney and waited. What I received back a few days later completely restored my faith. Rodney had added vocals, a bass track and drums. Up until this point we didn’t have any drums at all. In fact it had been a source of worry for me. I knew we would never have a complete song with no drums. We knew a couple of drummers and even had one of them record drums for Bad End. The problem was that all of them were too busy. The music we were recording wasn’t a very high priority to any of them. That became less of an issue when Rodney discovered the Independence Free midi drum composer.

I’ve never been much of a fan of computer generated drums. They always have this mechanical sound that isn’t acceptable to me. We were able to avoid this by keeping things simple. Rodney spent a lot of time tweaking the drums so that it gave us a good beat without being in your face. He told me about a feature that he used that is supposed to humanize the drums. I’m not exactly sure how it works but in my imagination it intentionally screws up every now and again. I got excited about this song for the first time since the beginning once I heard what Rodney had done with it. The drums in particular did the trick for me.

I got busy with the rest of the guitar tracks. The more we recorded the less we used the original riff I had written. It began as the driving force of the song. By the time we were done it was only used for a measure at the beginning and end of the song. It’s funny how sometimes the very genesis of an idea can be the biggest hindrance in its completion. In the end we ended up with one bass track, one vocal track, two rhythm guitar tracks panned opposite of each other, a lead guitar track and a midi drum track. Rodney was responsible for the mix of the song. I couldn’t begin to explain the effects that were added to each track. I know that he balanced the volume envelope of each one and added compression where it made sense.

All that was left was the video. Let me just say this about making videos, I hate it. Thankfully my partner in crime does not. The only credit I can take in the video production department is offering Rodney challenging material to work with. In my opinion, the video that he created for Otis Ray is the best to date. It is a kind of video / image collage of his father who is after all the subject of the song. I love that Rodney tries to add something new. I initially resisted the train scene while I was playing the lead part, but we showed it to several people who liked it. I finally concluded that I was not best suited for make video decisions. I only wish I could have given him better material to work with. I am going to get a green screen for next time.

Rodney videod his part in his backyard standing in front of the lake. He then added some kind of filter to the footage which turned out pretty good. All of the pictures were from Rodney’s own collection of family photos. The old videos were supplied by my father, Larry Craddock. It was footage of the 1992 Craddock Family Pitch tournament. Rodney is seen sitting next to his father in many of the shots. I think he was 18 or 19 years old at the time. If you look closely, I am in the very last shot standing in the back with a baseball cap on.

We have lots of old footage like the one used for this video. Our family is very close. Growing up, we lived next door to each other. Rodney and I grew up more like brothers than cousins. Uncle JW was like a second father to me and my father was the same for Rodney. Even though this song is without a doubt Rodney’s homage to his father. It isn’t hard for me to exchange those pictures into ones of my father as well. At the same time, I definitely learned my fair share of lessons from my Uncle JW. To me, ending the video with that unique laugh of his is perfect. He seemed perfectly comfortable at the center of attention amongst family. He jokingly called for everyone to clap for him. As you can see Uncle Jay, we are still clapping for you.