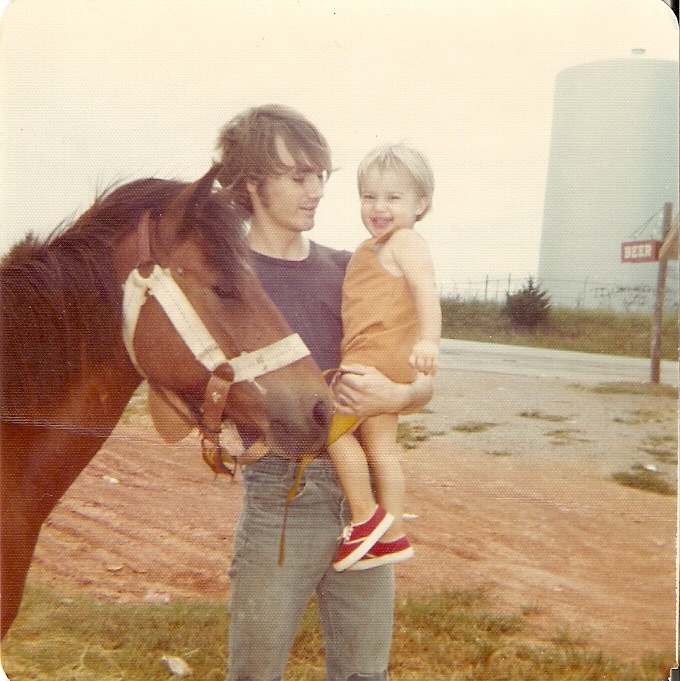 I was raised to respect my last name. I was taught to be proud of who we are and where we came from. When I was a kid, I thought that I was a member of a secret society. There was a strong sense of family. Being a part of it meant that you would never be alone. We loved each other and still do. I believed that if you shared my blood line then you were a step above. You got any benefit of the doubt. We treated each other like royalty. This honor did not come without demands. I definitely felt that I had a lot to live up to.

For me, as a child, everything began on Binger hill. As far as I was concerned life on earth began there with my grandpa Van and grandma Lucille. They were Adam and Eve and the hill was our Eden. I’ve since learned that our history is much older and more distinguished. We have had many proud moments as well as some we’d rather forget. We can trace our family to back before the revolutionary war. Although I can’t confirm it, we even appear to have an ancestor who lived in the original Jamestown colony. It’s not a secret that I am very proud of my family. I have so many great memories. Most of them happened up on that hill. I couldn’t possibly tell them all.

My immediate family didn’t move to Binger until after Grandma passed in 1987. I was thirteen. Before that we lived in Anadarko which is only about 20 miles away. Even then, I spent nearly every weekend running around Binger hill like the rest of the mob of children. And it was a mob of children. There were children of every age. My grandparents had nearly a litter of kids, who in turn had some of their own. Several of my aunts, uncles and cousins have called Binger hill their home. It seems like there have always been kids playing on those five acres. My Uncle Joe and my father Larry were the first two back in 1963. They were 10 and 12 years old.

As a young man, Grandpa Van was a farmer. He farmed land around what is now Chickasha lake. This is where the old homestead was located. All of their children were born there except Larry and Joe. Until 1945, he had a sharecropping arrangement with the owner of that land. On that year he leased some land about half a mile away and planted. Unfortunately, multiple years of bad crops convinced grandpa that it was time to walk away. The banker was ready to loan him enough money to try again another year. Grandpa was wary of taking a loan and decided against it. Instead he went to work for a businessman in Anadarko, Dee Higgins. They mostly did roofing jobs. They kept themselves busy tarring the roofs of buildings all over Anadarko. It was hard work but so was farming. It paid the bills, that is until he got sick.

In 1955, Grandpa was diagnosed with emphysema. The doctors said it was from years of smoking cigarettes and pipe tobacco. Grandma wasn’t convinced. She thought the culprit was the asphalt they used in the roofing tar. He never stopped working but it became harder and harder for him to breath. The manual labor was tough. Finally his body was just unable to perform as it had before. Up until that point, Grandma’s job was primarily raising kids. An occupation in which she was very experienced. She had already raised nine to adulthood with two more still at home. Unfortunately, this work would not pay the bills. Grandma was a take the bull by the horns type of gal. Without much of an education and no marketable skills to speak of, she took any job she could. Grandpa didn’t like the idea but sometimes you do what you got to do. Grandma began working as a bartender at the Mint bar. She later managed the Rock Castle both in downtown Anadarko, Ok. Times were hard and they didn’t have many options. But if anyone could turn things around with pure will and determination it was Grandma Lucille.

It didn’t take her long to realize that the only person that made any money at a bar was the owner. She decided to give herself a promotion. She rented a building in Ft Cobb across the street from the movie theater and started her own bar. Grandma was a quick study. She spent a lot of time learning the business of owning and operating a bar. By 1962 she was ready to make a few changes. She began looking for a new location. This time her establishment would not be in city limits. In town she could only stay open until midnight. She knew that many of her customers weren’t quite ready to go home that early. She began looking for places outside of town, but not too far. The five acres a mile west of Binger was perfect. Despite Grandpa’s misgivings she secured a loan and bought the place. There would be no more landlords. There would be no more rent. She was free to do things however she saw fit.

In 1962, Van, Lucille, Larry and Joe Craddock all moved into a tiny apartment in Binger, Ok. It was located directly behind what is now the Binger Drive-thru. It wasn’t much but it was a place to sleep while they began turning the old house, that already stood on Binger hill, into a drinking establishment. Grandma bought the bar table and stools, a refrigerator and other various items from a tavern that was shutting its doors in a neighboring county. She was definitely the visionary. Grandpa did his part but he was skeptical. He gutted the old house and began rebuilding walls in more suitable locations. However, he was still not thrilled with the idea of Grandma running a bar. One day she asked him what they should call the place. He responded, “Just call it the midget bar. It’s so small that’s about the only people who’ll fit.” So of course she did. The tiny sign above the front door read, The Midget Bar. The work continued. The bar table was placed in the middle of what is now a kitchen. Tables for patrons sat in the front room where a recliner, two couches and a television now call home. Eventually, it was time to open the doors on the business that would sustain the family for the next 20 years.

Dad and Uncle Joe were not allowed anywhere near the Midget Bar during business hours. They weren’t so lucky when the sign was turned to closed. They swept floors, cleaned tables and re-stocked refrigerators. They emptied the trash, crushed beer cans as well as various other tasks. Eventually they moved their beds from the small apartment to the back room of the bar. That was as close as they got. According to dad, it was too close. Every night they would fall asleep to the music on the jukebox. They both learned to hate that jukebox. The names Ferlin Husky, Jim Reeves, George Jones, Buck Owens, Conway Twitty and Faron Young induce winces even now from both of them. Oh and I can’t leave out Patsy Cline or Wanda Jackson. Their dislike of country music was an equal opportunity. I guess hearing the same songs over and over again will do that to a person. Thankfully, their beds wouldn’t remain in the Midget Bar storage room for long.

It just so happened that a team of men were in town constructing buildings. They specialized in garages. My uncle Onis was planning on going into business as a mechanic. So they decided to build a shop across the way from the bar. They put up a small building with four walls and roof. Before it was completed, Uncle Onis had decided on a different course. At the invitation of my Uncle Lonnie, he went to work as a telephone cable splicer. It was a good decision, they made a name for themselves. After that, cable splicing became the family business. In later years just having the last name Craddock would get you hired all over the country, experience be damned. In the meantime, there was an unfinished building across the way. Waste not, want not. It wouldn’t sit there unused for long.

Grandpa went back to work putting up walls in suitable locations. While he was at it he added a bathroom and a kitchen sink along the back wall. Dad likes to tell a story emphasizing grandma’s skill at project management. It’s unclear whether she developed these skills during her years of running her own businesses or if she was just naturally gifted. But according to dad, Grandma liked to visit the construction site and make suggestions for how Grandpa might accomplish his work. He would take it in stride and mostly answer with “yes dear” and such. Yes, he would move the plumbing for the sink over another foot. Yes, he could put the bedroom wall in the specific location she requested. Yes, he understood that despite what she had requested before that on second thought it might be better at a new specified location. Every once in awhile she’d push him just a little too far. He wouldn’t argue or get loud or even protest. He’d just look over at Dad and Uncle Joe and say “You boys wanna go fishing?” And that would be that.

That house is still standing across the way from what used to be the Midget Bar. It is one of many that now sit on those five acres that Grandma purchased back in 1962. Her intention was to take care of her family in any way that she could. I’m sure that neither Grandma or Grandpa found the situation ideal. I wonder if either of them would have ever dreamed that this land at the top of Binger Hill would someday be considered home to so many.