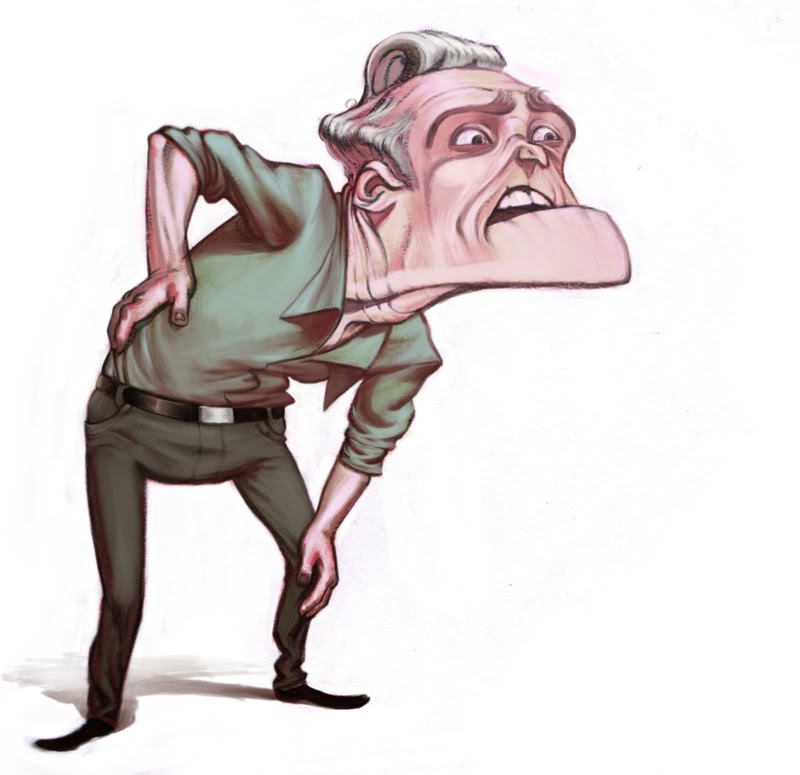 I sit on my ass approximately 15 hours a day. Can you believe that? Doesn’t that seem a tad excessive? I’m only awake around 18 hours.  At first when I did the math, I thought that I must have made a mistake. Nope, I easily sit that long. I guess I wouldn’t care except that recently I’ve started to feel pain in my lower back. Ok, recently is a lie. This back pain has been going on for about six months. It’s not the sort of pain that interferes with my life too much. It’s mostly just an annoyance like one of the kids tugging at my sleeve while I’m busy.

There are times when it’s worse than usual. For example, when I go from sitting to standing, I feel like a scoliosis patient. I have to straighten my back in a sort of crunching motion. It’s like straightening the flexible end of one those sippy cup straws. I feel pretty confident that this is the result of sitting all day for more than 20 years. Apparently the decision in my youth to avoid back breaking labor wasn’t as wise as it seemed at the time.

So how do I manage to sit that long? First off my job is pretty sedentary. I am a software developer. Ninety percent of my work is performed in front of a computer and the rest is in meetings discussing what should be done on the computer. Neither of these typically involve physical activity unless you count people running their mouths. I always intend to get up and take walking breaks but I rarely do. The end of the day kind of sneaks up on me. So today I decided to tally up my time spent sitting. It’s amazing how much I sit. It begins with my morning commute and ends with me reading a book at night.

Seven and a half hours of sitting from the time I wake up at 6 AM until I get home at about 4:30 PM is quite excessive for the work day. You’d assume that when I get home I’d be sick of sitting. You’d be wrong. My routine at home is a bit more varied. Each day I have something different going on. Most days I stay at home but on Mondays and Wednesdays I go to Hwangs Martial Arts gym. I participate in a kettlebell class while the big guy has his Lil Dragon’s class. On those days I get an extra hour of non sitting.

While I am at home the default position is ass on a chair. The main thing I do at home, sadly enough, is sit in front of my computer. Other things I do while seated is play my guitar, read a book, watch television and eat dinner. I do have a couple of activities at home that don’t involve sitting. I usually take about a 30 minute nap on the couch. Either one or both of the boys coaxes me into a battle of some sort daily. I also walk from room to room on occasion. Each of these mini journeys end in my sitting in a chair. These short periods of being off my butt don’t usually last very long. I’ve started to notice aches and pains when I stand for very long, not good.

In an effort to get a better idea of how active I am, I bought a FitBit. The FitBit is a fancy little pedometer. It tracks how many steps you take and uploads it to a website. I actually bought one for both Linda and I. It was no surprise to learn that she walks circles around me. I swear the woman never sits down. I suspect that she has been strapping the thing onto Ethan after I leave for work. If the stats are correct she is a little more than twice as active as I am.

It is pretty obvious that years of abusing my spine has left me with a constant dull pain in my lower back. Linda has been, well let’s use the word encouragement. She has been encouraging me to go see a Chiropractor. She went to see one a few months ago and swears by it. I finally relented and she made me an appointment to see a doctor after work today.

I’m a tad nervous about it. Everyone I’ve talked to tells me how good it felt and how bad it hurt usually in the same sentence. I’ve heard of this sort of thing. It’s called sado masochism and I’m not into it. I fully expect the doctors office to be pitch dark with a single flood light illuminating some kind of torture device in a bright circle in the center of the room. If the doctor shows up dressed in black leather wielding some kind of demented weapon like a bullwhip, I’m out of there.

Everything turned out to be fine. My lower back was slightly out of whack but nothing the doctor couldn’t handle. The doctor, by the way, looked normal but there was a torture device in the room. The lighting wasn’t as ominous but I was made to lie face down on this “chair”. I could hear her fumbling around with something and the next thing I knew, BAM a loud noise and my back popped. It didn’t even hurt.

To be honest I was a little disappointed. Not that I wanted to be in pain but I was kind of expecting something a bit more drastic. Afterwards they took me into another room and hooked up some electrical device to me. I was sure that I was in for some kind of experimental electro-shock torture/therapy. I prepared for martyrdom but this time I was pleasantly surprised. It felt good, I had to ask the doctor to turn it up a notch a couple of times. All in all the chiropractor visit was a bit of a letdown compared to what I was prepared for. The moral of the story turned out to be don’t sit on your wallet. Really? That’s it?