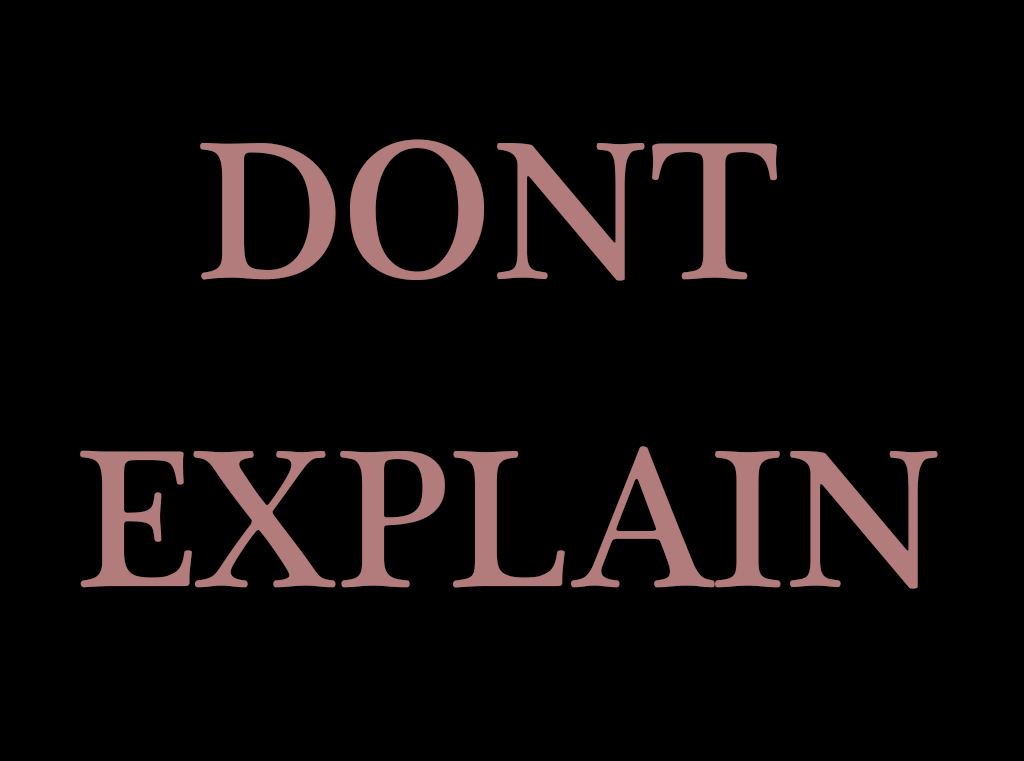 When you explain your decisions to people, you leave yourself open to their counter arguments. You offer them a problem to solve. By giving them insight into what you are thinking, they have your tacit approval to come up with a workaround. If you know that you are not going to change your mind then stop wasting everyone’s time. The best thing to do is to just say no thank you.

For example, the other day I got a call from a telemarketer. His name was Jim. Jim seemed like a nice guy that was ready to help me out. He wanted to sell me supplemental life insurance. I told him that I didn’t really need life insurance. I explained that the company I worked for already had me and my wife covered with plenty of it. He wanted to know how much we had. He was concerned about what would happen if I ever left or lost my job. Jim had many reasons for why I should consider getting more and from him. He had a big presentation that he was ready to go over with me.

Another time, I was talking to a coworker from another team. She was curious about a project that we were rumored to be working on. This particular project was still in the very early planning stage. She asked, so I told her about some of the features that we were considering. I was very careful to let her know that nothing was set in stone. She was excited about one feature in particular that we ultimately did not build. Unfortunately she told the people on her team. Everyone was upset when they discovered it was not going to happen.

When my youngest son was little, he asked me for a kitten. We already had three dogs and I didn’t feel like he could take care of a kitten while also paying enough attention to the dogs we had. I explained all of this in great detail. He begged and promised to feed it and to play with it every day. He was very persuasive but unsuccessful.

In each of these situations, I could have saved everyone time and heartache by just politely saying no without explanation. There is no need to be rude. Keep it simple. “I’m sorry, no” works fine. Don’t hem haw around by saying “maybe”, or “let me think about it”. Also, don’t say, “I can’t” because probably you can or they wouldn’t have asked you. Saying you can’t will only encourage them to figure out how you could. They might not like it. They may even ask for an explanation. Don’t give one. If pressed, just say “I’m sorry, no” again.

Many of us are hesitant to do this. It feels rude. Somehow, we feel like we owe people an explanation for our actions or decisions. We don’t. Like Don Corleone said, “Never tell anyone outside the family what you are thinking”. What we are feeling is insecurity and fear. What if I am doing the wrong thing? Maybe I do need that supplemental insurance. Maybe I should have tried harder to include that feature. Will my young son be traumatized over not getting a kitten? I say trust yourself. Ultimately, it is you that must act. You typically know what fits in your life better than anyone else.

If you are going to say no, then explaining can only have two outcomes, neither of them are good. First, you will waste their time. They will most likely feel indignant when you eventually say no. Second, they might actually change your mind and pressure you into doing something you did not want to do. Sure someone’s feelings could get hurt but their feelings are not something that you can control. Your actions should not be something that they can control. The only thing that this person might have cause to get upset by is if you string them along with some lame explanation.

The same goes for when you say yes. I often get asked to help with a computer. Sometimes people ask me for money. I’ve been known to help with a move, or haul something in my truck. I’ve noticed that when I say yes, nobody ever expects an explanation. If you say no then they often ask why, or try to change your mind. Recently I was asked for a few bucks by a family member that I don’t see often. The person was down on their luck and asked for a loan. I gave them the money and told them not to worry about repaying it. No explanation was necessary. About a month later, they again asked for a few bucks. That time I said no. They explained to me about how they were out of a job and needed some help. It felt bad to say no. I felt I had good reasons for what I did. I still had the overwhelming desire to explain why I wouldn’t help this time. So I gave an explanation. It didn’t make him feel any better. It didn’t make me feel any better.

There are times when you may actually be looking for advice. You might appreciate help figuring out what to do. For those cases, by all means, start a dialog. The more explanation you give the better. The more information you share the more that person can help you make a decision. However, I suggest that you seek people out for advice, instead of waiting for them to come to you. When people come to you, they have their own agendas. When asking for advice or help, follow the golden rule. Don’t ask anyone else to do something that you are unwilling to do. If you ask for help and the answer is no, respect their decision.

As with most things, there are exceptions. The main exception is when you are trying to teach someone something. For example, I learned this lesson from my father. I am in turn sharing it with my own children. Smart children tend to ask why. Giving them insight into your thought process is usually a good thing, as long as they learn when to keep their own counsel. I think Vito Corelone would agree.